Look what people have to say about Larry Mahnken's commentary!

"Larry, can you be any more of a Yankee apologist?.... Just look past your Yankee myopia and try some objectivity."
- Bernal Diaz

"Wow, Larry. You've produced 25% of the comments on this thread and said nothing meaningful. That's impressive, even for you."
- Anonymous

"After reading all your postings and daily weblog...I believe you have truly become the Phil Pepe of this generation. Now this is not necessarily a good thing."
- Repoz

"you blog sucks, it reeds as it was written by the queer son of mike lupica and roids clemens. i could write a better column by letting a monkey fuk a typewriter. i dont need no 181 million dollar team to write a blog fukkk the spankeees"
- yan

"Boring and predictable."
- No Guru No Method

"Are you the biggest idiot ever?"
- Randal

This site is best viewed with a monitor.

Disclaimer: If you think this is the official website of the New York Yankees, you're an idiot. Go away.

Looking Ahead to 2007: Robinson Cano
by SG

I guess I should have nominated Cano in the most overrated prospect thread the other day. That he still gets talked up as some kind of top prospect (not pointing at John here, by the way) amazes me.

I've seen Cano play a lot, and I'm not even sure he'd be a productive Triple-A player. Let's start with his defense; it's brutal. He has terrible footwork and simply lacks any kind of instincts around the bag. There's no way you want him playing up the middle. He might have the raw speed to not be awful in left field, but that's about as kind as I can be regarding his glovework. Offensively, he's a fastball hitter. He sits dead red on every pitch and waits for a mistake. Any good breaking ball or offspeed pitch will have him out in front. He's mostly a gap hitter, lacking the power to drive the ball consistently over the wall. To add insult to injury, he's also a terrible baserunner.

Reading that scouting report never gets old. To be fair to Cameron, prospecting is a very difficult thing to do, and it's very probable that the Cano he saw play is not the Cano the plays for the Yankees now. Players can develop, and their skills can change. And Cameron was far from the only person who didn't think Cano was any kind of a prospect.

After replacing the unsurprisingly horrific Tony Womack in early 2005, Robinson Cano followed up a solid debut season with an outstanding sophomore season. Cano led AL 2B in many value metrics, from Win Shares (tied with Tad Iguchi) to VORP, Cano was rated the most valuable second baseman in the AL. Throw in defense that rated from average (Zone Rating) to above average(UZR), and the Yankees had a gem in their 24 year old 2B. Cano's a slashing type hitter. He does not work the count and rarely walks, but he's very adept at hitting the ball the other way with some power, and used that to great advantage in 2006.

One concern when projecting Cano going forward is that so much of his value in 2006 was dependent on his .342 batting average.

Here's the list of players who've had a season where they hit for an average of .330 or higher at an age of 25 or younger in a full season (400+ AB) since WWII.

There's not a bad player in that bunch, is there? What this tells me is that any player good enough to hit as well as Cano did in 2006 at a young age is not likely to be a fluke. He may not be a true talent .340 hitter, but he's clearly talented enough to produce at an All Star level. He may never walk that much, but if he can play average to above average defense at 2B, he's going to be one of the better players in baseball at the position.

So let's look at Cano's projections for 2007. (to enlarge any images below just click on them) 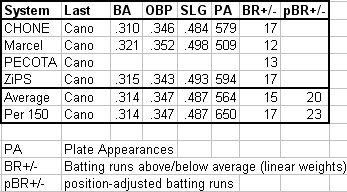 Not surprisingly, he's not projected to hit .340 again. It appears that the projection systems all agree that he should be solidly above .300, projecting to be about two wins above the average 2B offensively. 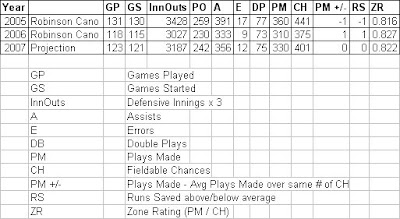 So offense plus defense, Cano looks like he should be worth about 2.5 wins above the average 2B in 2007. If you want to put that in terms of replacement level, a replacement level player is typically about two wins worse than average if you use a reasonable estimate that doesn't assume replacement level on both offense and defense, which is unrealistic. So add two more wins, that makes Cano about 4.5 wins better than replacement level 2B.

With the projections out of the way, I wanted to take a deeper look at Cano's underlying stats, since his main skill is volatile (batting average). Remembering an interesting article over at The Hardball Times, where Dave Studeman broke down some batted ball data, I used my play by play database to look at the different batted ball types and how often they become hits, and what kind of hits.

Retrosheet classifies batted balls as one of four types. Groundballs, fly balls, popups, and line drives. Here's the summary of the different types of batted ball types for all of MLB in 2006, and how they broke down as far as outs and hits/types of hits.

Theoretically, we can look at the similar breakdown for Cano and see if he has been getting "extra" hits that he may be getting lucky on. I'm looking at 2005 and 2006 combined for Cano, just to give us more data to work with.

So when Cano has hit a ground ball, it's been a hit 28.5% of the time, compared to the league average of 27%. Over the 453 ground balls he's hit, that's seven extra hits, which would make his career average .312, not .319. So I feel pretty comfortable that he's not been particularly lucky as far as ground balls becoming hits, and that any regression in this area shouldn't impact his value too much.

Looking at fly balls, Cano's turn into hits 30.4% of the time, league average last year was 28.3%. That's another four hits over two seasons which he conceivably may have gotten lucky on. Add those four to the prior seven hits, and you're down to a .308 career average.

Moving on to pop ups, we now see that Cano's gotten two more hits than you'd expect based on the league average conversion rate for popups. If we assume league average luck on the batted balls so far we remove 13 hits from his line, which puts his career average at .306.

Last are the line drives. Line drives are the best type of hit for a hitter, because they are the least likely to be converted into outs. Cano was actually a touch unlucky here, getting one fewer hit than you'd expect based on his line drive percentages.

If you adjust his line and replace his actual results with the league averages for the different types of batted balls, you still end up with a batting average of .307. So even if you factor in that Cano may have been lucky to this point to have a career line of .319/.342/.490, a correction using batted ball data still puts him at somewhere around .308/.331/.476. That would still be a higher OPS than any full-time AL 2B had last year. Add in the expected improvement of a 23 year old who just turned 24, and odds are very good that Cano will be one of the top two or three 2B in the league next year, even if his value is batting average dependent.

One thing that I should note is that not all batted ball types are created equal. All these balls can be tracked as one of four types, but there's still plenty of variability in the types of line drives, fly balls, and grounders that these numbers will not capture. So this is imprecise and should be taken as such.

Here's a graphical representation of those numbers. 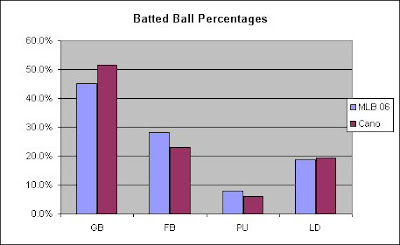 Cano hits a higher percentage of ground balls and line drives, and hits fewer popups and fly balls. Since ground balls and line drives are hits a higher percentage of the time, this is another positive indicator that he has a skill set conducive to hitting for average. If Cano starts to hit more fly balls, it will likely come at the expense of his batting average. However, the increased power that would probably result could make up for that.

Without looking at any data, I've assumed that it was Cano either pressing to impress the hometown fans or a change in his approach with the short porch in RF, or some combination of the two. Let's see if the data has enough information to quantify either of those.

Cano strikes out more frequently at home. This could mean he's aiming for the fences more frequently. He hits HRs at a slightly better rate at home, but loses a lot of doubles.

Now, let's look at the pitches Cano's seen at home vs. on the road. I've also added the results of the first pitches of his AB (either 1-0, or 0-1). If he is overanxious at home, I'd expect him to start down 0-1 in the count more frequently there.

So at home, Cano sees 3.35 pitches per plate appearance. On the road, it's 3.21. So he seems to be more patient at home. He does fall behind in the count more often at home, although that seems to be because he is more willing to take a first pitch strike.

Lastly, let's see if his batted ball distribution is different at home.

And the numbers above graphed: 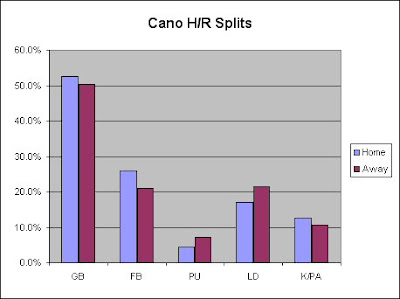 Cano hits a higher percentage of fly balls at home. I wonder if this means he's trying to hit HRs? It does at least partially explain the lower average. I'd have to imagine that this will correct itself at some point. Hopefully in 2007.

I really enjoy watching Cano play. He just seems like such a natural hitter. His only weakness right now is his seeming unwillingness to walk, but if he can hit .320 or so and his power develops along a typical career path, he's going to be an asset for years, even if the walks never come. And as with any young player, there's always the possibility for more. Cano's already defied a lot of doubters and made a couple of quantum leaps in his development over the last few seasons. Who's to say he's done improving?

How good is Cano? Ask yourself what 2b you'd trade him for right now. Ignoring contracts, the only one I'd probably even consider is Chase Utley.